My journey towards a Law Degree

In between life’s difficulties are times when God says, “Today, I’ll give you a foundation that will bring happiness and prosperity”. These times and life’s struggles molded me into the person that I am today. I was once a poor child, unsure whether I will get education. But now, I am a recent Law Degree graduate, thanks to the support of CFC ANCOP PNG and Australia.

I was born in 1997 into a beautiful family of six. My parents were local fish sellers in Gerehu Stage 6, a poor residential district in Port Moresby, Papua New Guinea.

Coming from a Catholic background, I and my family have always prayed that God will deliver us from poverty. Though I was just a kid, I knew that God will one day hear our prayer. I just needed to continue praying, have faith, and obey my parents.

When I turned five, I was eager to go to school, but money was a problem. But we kept praying and like the old saying goes, “With God impossible is possible”, we started seeing the works of God in our household. My aunty got a job in a stationery company. She brought books home for me and my siblings to read. This fueled my desire and my resolve to get education.

Two years later, in 2004, something unexpected happened to our community.

Gawad Kalinga-- which was the name of CFC’s work for the poor then but is now known as ANCOP-- came into our community and asked if they could help develop and transform our village as part of their community development program. Many poor families in our community benefitted hugely from the houses that GK built.

In addition to housing, CFC also helped many kids like me to go to school. I became a GK (later ANCOP) scholar at Saint Paul’s Primary School. Because of my outstanding academic results in grade 8, I got selected to do my grades 9 and 10 at one of the top ten high schools in the country, the Saint Charles Lwanga High School. With God all things are possible! 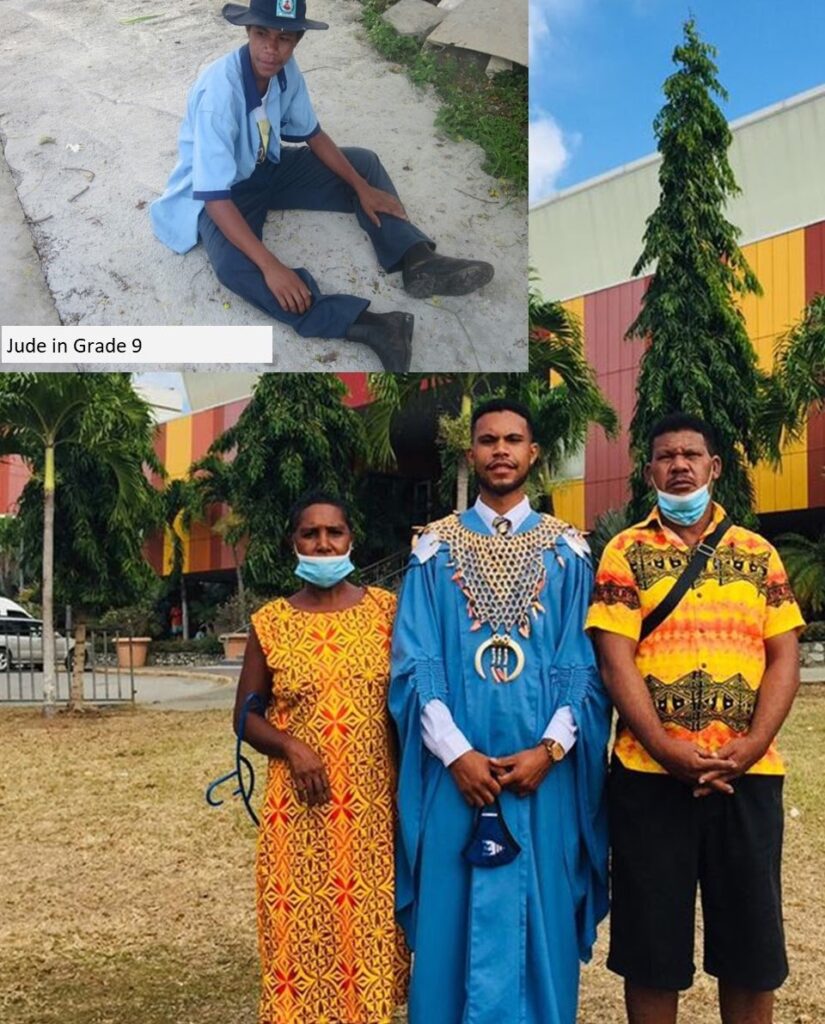 I remember the time when Uncle John Orea, one of the ANCOP volunteers here in PNG, asked me what I wanted to become in the future. I answered, “one day I want to finish my education at the University of Papua New Guinea and become a lawyer. I will fight for my family’s customary land rights”. From that moment on I built that enthusiasm to learn as much as I could and focus on my education. I kept dearly to my heart a quote from Bill Gates who once said: “If you are born poor, it’s not your mistake, but if you die poor, it’s your mistake”. To me this is also saying that if God uniquely created us with the potential to make a difference, it would be disappointing to God if we do not utilise those potentials to help others and we die doing nothing at all.

After scoring very high GPA in grade 10 examinations, I was selected to be among the 17 pioneer students at my high school to do grades 11 and 12 at the Sogeri National High School, another top school in Papua New Guinea.

I was very excited about Sogeri High, but it was going to be a school away from home as it is located outside of Port Moresby. So after sixteen years of living in Gerehu, I lived away from home. I missed my family so much, especially my mother (I was born on Mother’s Day!). I knew praying was the only solution to help me go through a period of feeling homesick and eventually each day went by, and I grew more independent and confident about myself. If one thing prayer thought me was to seek God’s wisdom in finding solutions to my problems. I left home, and now I could only depend on God, my friends, and teachers in Sogeri National High.

In 2016 I was appointed as the Scripture Union Outreach Coordinator facilitating in helping other students seek God and his kingdom. Being a leader, I grew more confident about addressing issues with the principal, teachers and the student body as a whole. In my time there I was part of the team that opened new infrastructures such as the auditorium, science lab, social science classrooms and the new duplexes for accommodating students and reviving the biannual cultural show. Unfortunately, all things must come to an end, winding up my time in Sogeri. At the school's 48th Graduation Ceremony I was recognised as the most outstanding student leader and awarded the Citizenship Award.

To God be the glory as in 2016 I was chosen among thousands of applicants to do Law Degree studies at the only School of Law in the country, at the University of Papua New Guinea. Although, there were those times I faced my own adversities in life God did not plan for me to stop there and so after five years of law school I completed my Bachelor’s Degree of Law in 2021 with educational sponsorship from CFC ANCOP Australia.

I know that this degree is just a milestone achievement of many achievements to come. As humble and proud I am of myself and my family, I can say that all the prayers, the efforts and resources put into helping me achieve my dreams and goals did not go in vain but has bear its fruit after all these years.

Despite the fact that many are called but few are chosen, I can proudly say that ANCOP has changed my family and my life. From being a fisherman and a housewife, today my parents are fighting for our customary land rights from corrupt officials and organisations who think so lowly of my people, and I am always at their back giving advice. Now that I have completed my law degree, my next objective is that by April next year (if COVID does not interrupt) I will be attending the Legal Training Institute (LTI) to meet the bar requirements and get admitted to the Bar as a lawyer. Once a lawyer I can legally represent poor people, including people whose customary land rights are trampled by others.

To conclude, it is my biggest plea to CFC ANCOP Australia to continue the marvelous work of the Lord that you have already started in our country. Yesterday, you opened to a pupil a classroom door that gave birth to a lawyer. I pray that you can continue giving many poor kids like me a chance at education, and a chance at making a difference in their lives in this great nation of Papua New Guinea.