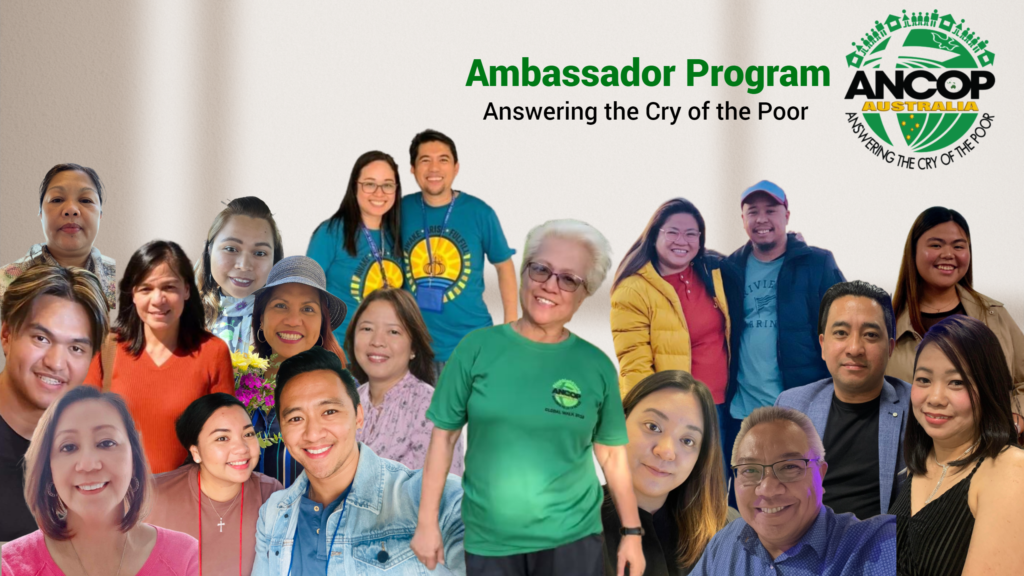 The AA Program is a biennial event that started in 2012 and is one of the fundraising activities unique to CFC ANCOP Australia.

The program, sometimes referred to as the AA Event or the AA campaign,  takes place over a period of several months, beginning in March. During this time, representatives from each state/territory or CFC chapters take on the role of ANCOP ambassadors.

As ambassadors for ANCOP, they spread awareness of the work of ANCOP and foster among CFC members and the wider community ANCOP’s vision which is “Families in the Holy Spirit sharing God’s transforming love with the poor”.

The ambassadors will rally their local CFC community and supporters outside of CFC to raise funds for the three main programs of ANCOP, namely the Education Sponsorship, Community Development, and Calamity and Disaster Response programs. An ANCOP Ambassador Appeal Page in Gofundraise is now able to accept donations to ANCOP through the ambassadors' fundraising pages. Visit the Gofundraise ANCOP Ambassador Appeal homepage  to donate or to read more about the stories of the ambassadors.

The ANCOP ambassadors present to all the households in Couples for Christ. They also coordinate with their local ANCOP team in organising fundraising activities and events during the campaign period.

“To broaden the reach of ANCOP, we will promote this program extensively throughout Australia, to include or encourage the involvement of people and community groups outside of CFC”, said Nick Vargas, the AA Program Coordinator.

“Heeding the call to provide help to the less fortunate should be our response during these difficult times. People have suffered much because of the pandemic. We can help them recover and give them hope”, added Nick.

In 2020-21, CFC ANCOP Australia provided education sponsorships to more than 500 poor kids and young adults in the Philippines, and provided funding to various education infrastructure and support programs in Papua New Guinea, Solomon Islands and Vanuatu, which are benefitting thousands of poor families.

“The funds for the 2020-21 projects came from the donations of our supporters who, despite the global pandemic, generously supported the previous Ambassador Program. Despite all the challenges, the previous batch of ambassadors helped raised more than $500,000 in donations and fundraising proceeds, including from the 2020 Fun Run”.

“We were so happy, blessed, and humbled by the outpouring of support from all the volunteers, donors, and partners, and we pray to see the same level—if not more—of outpouring in this new AA campaign”, said Goody Maquinad, the CFC ANCOP Australia president.

“We hope to continue providing sponsorships to our current students and to assist many more. Our programs in the Oceania Region are also growing— further support is needed to sustain them”, said Goody.