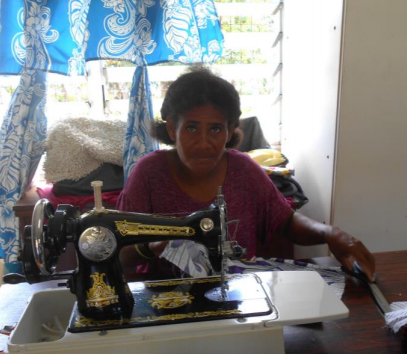 Hilda Mae is 30 years old. The only child of separated parents, she grew up with her mother in a far-flung village in the southeast of Guadalcanal island. Hilda recalls that she could hear and talk up until she was five. According to her family, she fell ill at that age, with the illness affecting her brain. She lost her ability to hear and speak after that. Like most other students in the Centre, Hilda has previously never received any form of basic education. She remembers the sadness she felt watching other children go to school, while she stayed at home performing household chores and gardening. She was introduced to San Isidro Care Centre in 2017 by her uncle, a catechist in the nearby village.

At San Isidro, she is glad to have gained knowledge and skills in sign language, reading, writing, cooking, baking, sewing, gardening, and looking after animals. Her favourites are sewing and baking. Now in her fourth year, she is able to learn more on baking pastries and cakes, and on sewing children’s clothing.

Hilda Mae has a 6-year-old daughter who is now in kindergarten. Her mother looks after her daughter while she studies in San Isidro. Hilda also teaches sign language to her daughter, Lea, whenever she is home for the school holidays.

She is thankful to ANCOP Australia for providing sponsorships for her and all the students of San Isidro since 2019. Through this assistance, the school is able to provide for her needs during the school year. She is employed by her relatives in the city of Honiara during school breaks. Hilda and her family are grateful for the kind support of CFC ANCOP Australia.