God Will Make a Way 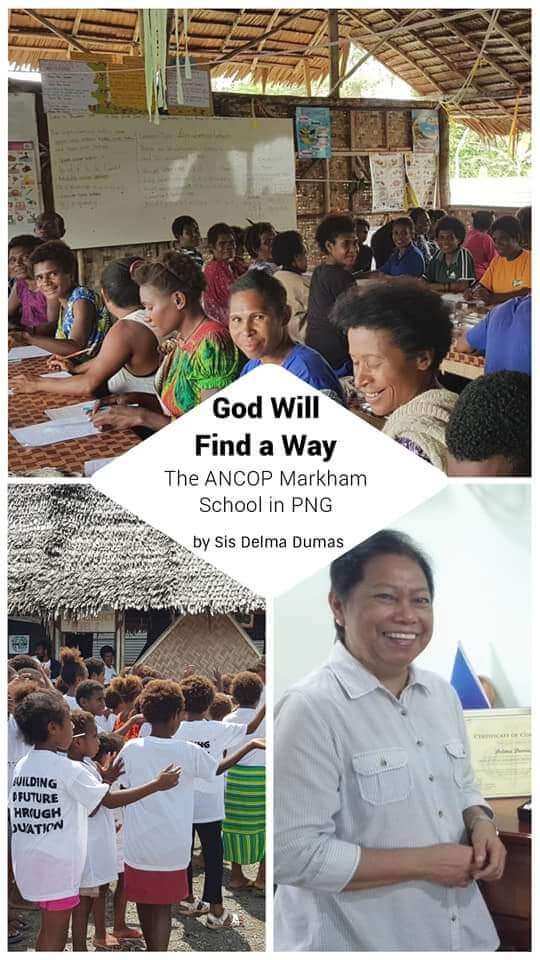 y. Each gift has helped me see the beauty of my service as a Handmaid of the Lord serving in Lae, Papua New Guinea since 1997.

My first special gift are the poor. I was blessed that God surrounded me with them. I am grateful for the opportunity to serve them. I have always the passion for helping the poor, for by loving and helping them, I serve the Lord.

The second special gift I received from God is ANCOP- “answering the cry of the poor. The acronym itself conveys a very powerful message. Immediately I fell in love with its mission that without any hesitation, I embraced it and accepted it as another gift from God.

In 2017, there were 20 Handmaids of the Lord (HOLD) scholars who completed a short course in garment construction. Later, I set up a space for them at my workplace so they can start using their sewing skills. Soon, the sisters were already busy sewing dresses using the 10 units of sewing machines donated by our HOLD sisters from American Samoa through the initiative of Sister Thelma Hizon.

I have seen that sewing have sustained them; not just as a source of livelihood, but also a source of sense of self-worth and belonging. Sisters coming to the workshop everyday became their way of being together, to be in touch with one other in worship, in prayer, in the sharing of food, and in supporting one another to enhance their newly found talents and skills.

There is a plan to relocate them to Markham Bridge, a remote area outside of Lae, when the new ANCOP school building (pictured) is completed. We also plan that these sisters will run a sewing training for prospective enrollees in 2020. They will become the future ANCOP volunteer trainors for this course in that school.

Let me tell you about this school. In March 2018 we started building a school in Markham Bridge. I donated part of my land for this. The school provides free education to the people of this very remote area. The community in the village volunteered to construct the building while the sisters contributed their time and effort helping to facilitate the construction of the school.

The school officially opened on 16 July 2018 and we named it “The CFC Handmaids of the Lord Literacy School”. It opened with 200 students in adult literacy levels 1 & 2 and early learners levels 1 & 2 classes. They were under the care of two HOLD sisters who are full-time teacher volunteers. After a few months, I donated the school, the land, and other facilities to ANCOP so that ANCOP can take over the project. I continue to support the needs of the school while some sisters also help maintain the school ground and as helping hands to the teachers.

As I watched the students, parents, visitors and the handmaids singing the PNG national anthem, reciting the PNG pledge, and the tribal dancing that followed during our first year anniversary celebration, I cried silently because I was extremely touched by how God filled my land with His glory when it was used to be filled with tall, wild grasses and the place was empty. Now I could hear the children praying the prayers that Jesus taught us, and the Hail Mary, to honor our blessed Mother. What a great joy to know that I have plenty of grandchildren here in PNG whenever these school children greet me “good morning Bubu (Lola) Del”.

As I look back, there were times when I asked impatiently, “how can I keep my faith while waiting on God to answer my prayer”? But he planned out everything to interwine perfectly in the end. God has His timetable. My original dream was only to run a literacy class for the handmaids who cannot read and write so that they can read the Bible, but God is so amazing that 13 years after the first literacy class, He gave me a humble literacy school where a mother and a son goes to school together. The mother goes to the literacy class and the son to the early learner class, and the son told the father “we learned many things… new things in the school.” I praise God, for He blessed us with CFC and ANCOP as his instrument to strengthen family and community relationships and to bring more and more people closer to Him.

We have 48 new CFC HOLD members who were ANCOP literacy students. They now attend household prayer meetings and prayer assemblies in town, even if they have to walk tens of kilometers from their village to the main highway to catch a bus, rain or shine, and with the constant fear of rascals on the road. I could not believe listening to those sisters who previously cannot read but are now confident to hold the microphone to read the Bible. They openly shared powerful stories of their transformation. It is very inspiring to witness these sisters share about how the Holy Spirit transformed and empowered them in the midst of their poverty, marriage and family problems. We felt emboldened to serve God more.

God continues to support and inspire us. Our bishop, Most Reverend Rozario Menezes, was very supportive of our work that he presented a video of our Markham literacy school to the recent ANCOP congress in Manila to rally for support. The bishop also plans to make the village at Markham Bridge another new parish of the Diocese of Lae. It's all coming together!

The blessings kept on pouring. On 30 September 2019, Bro. Bong Bernardo, former president of CFC ANCOP Australia, came for the groundbreaking ceremony for the new school building to be constructed inside the school compound. This time, the building will be made of steel materials, and no longer the bush materials of the current building. He announced that funds for the construction was already underway, coming from several ANCOP partners. Thank you bro. Bong and praise God for this.

All the while, I thought, it was only the Handmaids who committed to work on this project. But now we cannot count the number of people that God had sent to support our work with the poor through ANCOP.

We are most grateful to our ANCOP family in Australia who pioneered the huge support for this project, led by brothers Dom, Goody, Ruel, Bong and sisters Josie, Lolit, and Alida. They led and opened the gates for more financial support of the school.

God will indeed make a way to sustain what I and the local Handmaids have started.

I praise God for He allowed my dreams to come true, all for His greater honor and glory!

Postscript: The Markham School has now been expanded and became a concrete building, thanks to the support of CFC ANCOP Australia and other benefactors. Watch this video for an update.